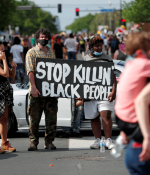 American Racism: Depart from Me, Ye that Work Iniquity

“Do not judge, or you too will be judged. For in the same way you judge others, you will be judged, and with the measure you use, it will be measured to you. Why do you look at the speck of sawdust in your brother’s eye and pay no attention to the plank in your… Read More ›

Please Forgive Me For My Honesty

I am starting to understand how the prophets of old could look upon their society and weep about how the people were acting and how they believed. When looking upon our own society it is easy to become clouded about the sugar coating being placed upon everything and how so many are being told what… Read More ›

Has the Rise of Donald Trump Initiated the Opening of the Seven Seals of Revelation?

“And I saw when the Lamb opened one of the seals, and I heard, as it were the noise of thunder, one of the four beasts saying, Come and see. And I saw and behold a white horse: and he that sat on him had a bow; and a crown was given to him: and… Read More ›

Mueller Report, 2020 Election and the End of the Timeline

The Election of President Donald Trump has brought polarization to the United States of America and the entire World. We are witnessing a division within this great nation that has not been witnessed since the Civil War fought between the North and South. Listening to the political leaders from both political parties shows the extent… Read More ›

You Foolish False Prophets, What Are You Doing?!?!

The disturbance in my soul watching the so-called prophets of God talk about Bible prophecy is beyond what I can measure. I watch the talking heads say prophecies that have nothing to do with the prophetic word and call them their own.  They state that these are revelations to them from God and that we… Read More ›

Romans 13: For God or Country

“I will send my messenger, who will prepare the way before me. Then suddenly the Lord you are seeking will come to his temple; the messenger of the covenant, whom you desire, will come,” says the Lord Almighty. But who can endure the day of his coming? Who can stand when he appears? For he… Read More ›

Ever sense Donald Trump appeared on the campaign trail we have heard his message about building a wall on the southern border of the United States.  This wall would be placed between Mexico and the United States and we are told the reason for building this wall is to keep the illegal immigrants out of the US